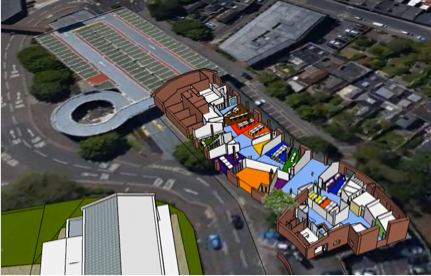 A current change.org petition asks Exeter City Council to “abandon the PSPO proposals and work with homelessness charities and other relevant bodies instead to work out non-coercive strategies for providing meaningful and long-term support for vulnerable people in Exeter.”

We would like to take this opportunity to explain some of the pro-active work Exeter City Council [ECC] is doing to help rough sleepers on the streets of Exeter.

Instead of waiting for outside temperatures to fall below zero for 3 consecutive nights before opening up additional spaces under the Government’s Severe Weather Provision, ECC is a key partner driving the Safe Sleep Exeter initiative forward. The Safe Sleep Exeter partnership is keen to offer a safe place to sleep for those with no other options.

Through pooled resources from a variety of agencies and partners, under this scheme an additional 26 spaces to accommodate rough sleepers will be available from 1 December to 28 February, including specific provision for women. Partner agencies include Devon County Council, East Devon District Council, NHS, Devon and Cornwall Police and local providers BCHA, Julian House and St Petrock’s.

It is hoped that in this safe place, ECC’s newly appointed Street Outreach team – Julian House – can engage with rough sleepers to offer them the accommodation and support they need, ideally helping them to move through into longer-term options. This is much more satisfactory that trying to meet up with rough sleepers on the streets of Exeter. In particular. Safe Sleep Exeter will link directly into ongoing projects such as MEAM (Making Every Adult Matter -; focus on complex homeless individuals) and the development of ICE (Integrated Care Exeter) which is a strategic alliance of public, voluntary and community sector organisations

Early in 2016, ICE will be trialling a new Health & Well Being Team which brings together existing resources to deliver a single, integrated approach. The purpose of ICE is to better meet the immediate and longer term needs of the street homeless and to ensure that only people who have a clinical need for inpatient acute care are admitted to hospital.

Exeter City Council is also working with many of the same partner agencies to deliver the Exeter Wellbeing Hub at Wat Tyler House in King William Street. The Hub (sometimes called Co-Lab) is a humanitarian community response to homelessness and other issues.

Being well aware of the complex needs of street homeless – especially those with addiction and substance abuse – the ambition is to create a recovery-focused, co-located and integrated health & wellbeing hub for people with a range of needs and capacities, based around a specialist GP surgery, but also including substance misuse, mental health, and offender management services. The new offer will integrate these services with adult learning, volunteering programmes, housing advice, personal finance & debt management, participation and citizenship programmes to create a ‘wraparound’ offer that better meets the needs of people using the hub, and creates a space for genuine integration of people, resources, expertise and systems within a holistic integrated approach. In particular, many of the services based at the Wellbeing Hub (including Julian House) will be tasked with helping Exeter City Council more fully engage with rough sleepers.

It is our hope that such positive engagement will actively reduce the number of rough sleepers. But of course, rough sleeping is only the visible aspect of homelessness – it accounts for 5% of the work on homelessness carried out by Exeter City Council. ECC is currently reviewing and revising its Homelessness Strategy, with the plan to make it an agile and flexible action plan. There is a Homelessness Task & Finish Group looking into this and the Group presented an interim report to Scrutiny Committee: Community in November:

It is hoped that another report will be brought to Community Scrutiny early in the new year.

The petition rightly points out that one of the root causes of homelessness is the lack of affordable housing – much of this due to the pernicious attacks by both the previous coalition Government and the current Tory one on social housing.

While the headlines of the local paper scream about each and every purpose built student accommodation block, they make little mention that such developments are freeing up houses in multiple occupation for shared housing for under-35s (housing benefit for this age range is focused on this type of property) and even returning those HMO back to family occupation.

Even under the severe Govt restrictions, ECC have directly built nearly 50 new Council Houses – each of them to eco-friendly Passivhaus standards to reduce energy costs. The best performance in the South West, although our ambition is to build many more.

ECC are also robustly enforcing the s106 affordable housing strategy outlined in the Local Plan. Every development above 10 units is required to deliver 35% affordable housing, the majority of which is social housing. That equates to almost 600 affordable homes in the past 5 years, and there are nearly 2000 more in the pipeline – but of course, much of that could be put in jeopardy by changes announced in the Chancellor’s Comprehensive Spending Review/Autumn Statement at the end of November. We are already looking at creative ways to ensure this work is continues despite the threats posed by the Housing and Planning Bill 2015-16.

The Public Spaces Protection Order is intended to address a series of anti-social behaviour issues, including urinating in the street and using intoxicating substances in public spaces. As Exeter City Council’s Labour Group, we are completely opposed to attempts to criminalise rough sleeping. Nowhere in the process have we considered the idea of banning rough sleepers from the streets of Exeter. So what have we considered?

The initial report was considered by the Community Scrutiny Committee in September and the public consultation was launched on 11 November 2015. Details of Scrutiny Committee’s discussion can be found in this blog:

The length of the consultation is much longer than the statutory minimum – to make sure everyone has chance to make their views known.

Rough sleepers have rights – but so do the other citizens, workers and businesses of Exeter. They have the right not to be intimidated or to have to face the daily ordeal of belongings left in doorways when they arrive for work.

The intention behind the PSPO provision is to ensure that bedding and associated articles aren’t left in shop doorways or in other places where abandoned items could otherwise be considered fly-tipping, and to encourage engagement with outreach workers and help rough sleepers to access the support available.

In the main, the street homeless remove their bedding each morning when asked. The PSPO proposes the ability for authorised persons to remove bedding only when the individual refuses to move it themselves.

We would encourage everyone to read the full PSPO consultation documents, and to take the time to respond – your views are a truly vital part of this process.

What’s the problem with people setting up tents or bedding down in shop fronts?

It is not so much that someone is sleeping that is the issue, but that the confrontational issues that can arise when employees are seeking access to open premises in the morning and are obstructed by someone with their bedding and paraphernalia, and who do not wish to be disturbed; often litter and other mess is left by the rough sleeper. In addition, long- standing encampments have their own problems of litter, sanitation, drug litter and dissuading others from using the open space occupied.

Will this outlaw rough sleeping in the city centre?

No it will not. The Order works by seeking to clear away the shelter (tent, bedding, bivouac, and associated paraphernalia) where it has been set up in a situation likely to be considered anti-social to the general public. An offence is only caused if the person refuses to clear away their bedding and other belongings when requested to do so by an authorised officer.

Are rough sleepers being targeted?

They are not being targeted. There are support services and temporary accommodation available to people who sleep rough, but some chose not to access this support. Sleeping rough in the city centre can place someone in a very vulnerable situation, and it is not beneficial to their health and wellbeing. Officers enforcing the Order will be briefed to signpost rough sleepers to appropriate support services.

What’s the problem with begging?

Many people feel uncomfortable or intimidated by people begging at cash points, parking ticket machines, under-passes and shop entrances. Sometimes the person begging can be aggressive in their approach, making people fearful, particularly when on their own. They can also put people off entering a shop if they are begging by the entrance, so the shop loses trade.

Sometimes people who have overnight accommodation at a hostel prefer to beg late at night because it can prove quite lucrative during the busy night-time. The problem with this is they may lose their accommodation and can be quite vulnerable to being picked on by night-time visitors.

Begging is actually a criminal offence under the Vagrancy Act, but under this act the only option is for the Police to prosecute the person begging, whereas the PSPO would allow the alternative of a fixed penalty notice to deter begging.

The PSPO is designed to deter begging, particularly aggressive begging, rather than genuine musicians busking in the street; however, sometimes this area is grey when someone begging may use a penny whistle. In terms of the PSPO, it will only be an offence to beg in a public place without the written consent of the land owner. So the Council will be exploring to adopt a similar approach to Princesshay shopping centre where there are designated busking points, and buskers are vetted before being allowed to busk in the public spaces.

What about Big Issue sellers?

People selling periodicals (newspapers, etc.) are not covered by the PSPO.