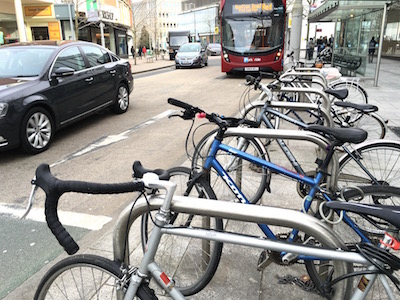 Cycling, walking and park and ride will be boosted and smart ticketing on buses and trains introduced to help tackle congestion and pollution in Exeter if Labour retains control of the council in May. The council will also insist on more frequent local services and stops at Exeter’s train stations as both of the rail franchises serving the city come up for renewal.

Exeter Labour pledge to set up a Transport Board to serve the city, bringing together transport providers, the public sector, cycling groups and others to develop a strategic plan to improve transport and reduce congestion, arguing the rural dominated County Council, which is formally responsible for transport in the city, does not give enough priority to Exeter’s needs.

“Exeter’s economic success brings its own challenges, including traffic congestion and pollution. Labour will take measures to make alternatives to driving safer and more pleasant, while using new digital and data technologies being pioneered in the city to improve traffic flows.”

“We will also make public transport easier to use with smart ticketing and better integration between services.”

Councillor Sutton said the council would also undertake a strategic review of bus routes and timetables around the city to ensure they actually served the public by getting them where they wanted, when they wanted.

“With walking and cycling we will ensure new provision is based on up to date best practice, with safe, designated routes, avoiding where possible cyclists and pedestrians sharing the same space,” she said. “We are developing pioneering technology with digital and data experts at Exeter City Futures which will help improve traffic flows and keep our city moving. We will also do more to provide alternatives for commuters who drive in and out of Exeter through better, expanded park and ride, the promotion of more car sharing and the expansion of our very successful car club schemes. Traffic congestion and pollution are challenges facing successful cities all around the world. If we want Exeter to continue to do well, while remaining a green am pleasant place to live, we have to tackle these challenges face on”.